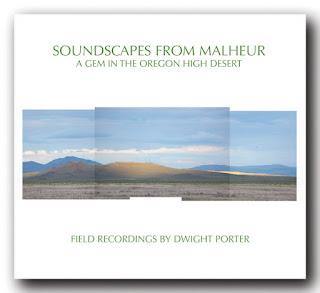 "When I need to escape the urban surf of the city, Soundscapes from Malheur transports me to a marsh after dark, where night-herons, rails, bitterns, and blackbirds create a rousing high-desert symphony".


Soundscapes From Malheur: A Gem in the Oregon High Desert is an album of natural soundscapes recorded in the vicinity of the Malheur National Wildlife Refuge in southeast Oregon. The album is a field recording of real sounds from a real place recorded in real time. There are no musical instruments or vocals, just pure natural soundscapes.

The Malheur National Wildlife Refuge is located in the Great Basin Desert, one of the least populated areas in the United States. Its remote location means natural quiet and star-filled skies, far from the noise and light pollution of modern civilization. President Theodore Roosevelt created the refuge in 1908 to protect declining  populations of wading birds which were being killed to supply the hat industry with decorative feathers. Today the refuge is a critical piece of natural habitat for breeding birds as well an important rest area for birds migrating along the Pacific Flyway. It’s also a refuge for people, a place to get away from the modern world of machines. Its value cannot be measured in dollars.

The album consists of four tracks:

Samples from the album:


Nighthawk Booms- Recorded at dusk in early June. Listen for the "boom" of a Common Nighthawk, produced by the male with its wings while in a display dive. Also listen for Western Meadowlark, Brewer's Sparrow, California Quail, Sora, and Ring-necked Pheasant.


Afternoon- Early Spring- Recorded in late March. The refuge is still dry from winter and the vegetation is still brown. The snow hasn't melted off Steens Mountain and replenished the wetlands yet. Birds are more sparse than later in the spring. Listen for the squeaky call of a Northern Harrier hunting over the dry grasses. Also listen for Song Sparrow, Sandhill Crane, Canada Goose, Common Raven, Red-winged Blackbird, and Horned Lark.

Deep Night Coots- Recorded in early June around midnight. Even though the sun is down many birds are active at night during the height of breeding season. Listen for the soft cooing of American Coots and the dry croaks of Western Spadefoot Toads. The toads are evidence of a wet spring and abundant water. Also listen for Pied-billed Grebe, Sora, American Bittern, and coyote.

Marsh After Dark- Recorded in early June just after sunset. As the light fades the sounds transition from birds to crickets. Listen for the squawk of a Black-crowned Night Heron and alarm calls of Black-necked Stilts. Other species include Virginia Rail, Marsh Wren, Franklin's Gull, Willet, American Bittern, and Yellow-headed Blackbird.