Natural quiet is not silence, it is the natural sonic ambience of a real place: the biophony* and geophony*, without any oppressive anthropophony*. These recordings are the results of efforts to record natural soundscapes without any intrusions of noise from the modern world. Natural quiet is getting harder to find in a world filling up with human technology.

This NASA satellite image of the U.S. at night can be thought of as a noise map, with the brightest areas (cities and towns) the noisiest and the darker shades the quietest. 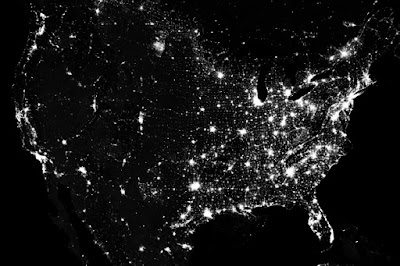 The large dark area to the left of center is the Great Basin Desert, one of the least populated areas of the United States. I am attracted to this area for recording because there is less noise pollution here and also because there are many unique habitats in this "sagebrush ocean" including desert oases, freshwater and alkaline lakes, and high mountain peaks.
Dwight Porter
Portland, Oregon